I wait in anticipation for the audience to breathe. No one wants to break the silence, not even a cough from a normally disinterested listener cracks the air.

He captured them all. 10 seconds could have passed at the end of his encore before a single clap triggered the wave of nervous supporters. It was a song for his grandmother, and it was so quiet and fragile, that it seemed to pass away as it arrived, drifting into silence.

Before seeing Ólafur Arnalds, I had spent the day with a close friend from my MA, a fellow sound artist, visiting a gallery, wondering about the shops and stopping for tea. We used the concert of a mutual inspiration as a means to ensure we met up after a long time apart, living different yet interestingly similar lives, only at the other side of England from one another.

I had finished a long weekend of work, tired and on edge, a day in London was exactly what I needed. It was at the National Gallery, with the very friend who showed me the opportunity online thinking it was well suited to me, that I received some life changing news. I had been selected for an SEAHA Studentship, which involved a fully paid and funded MRes and PhD with University College London and the University of Brighton. The project was titled ‘3D 5G Immersive Audio for Urban Outdoor Heritage Contexts’, and I would begin in September this year (I will add more about this opportunity as it progresses). Words couldn’t describe how exciting this was, and it was wonderful to get the great news with my friend there with me.

Both of us too tired to go out drinking in celebration before the concert, we had a cup of tea and rested, then made our way to the Royal Albert Hall to see our favourite composer. 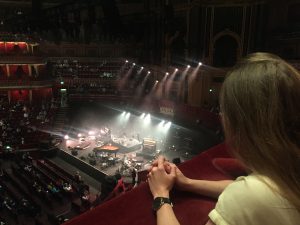 We had our own little box on the upper second level, with an amazing view of the whole hall and the stage. The performance was by far one of the best I had seen of it’s kind, with the lights and two upright player pianos playing in sequence triggered by Ólafur’s notes, and some very talented string musicians and a percussionist thrown into the mix. 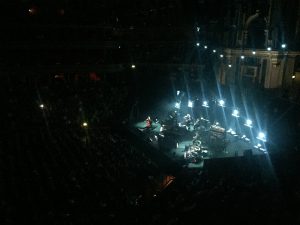 The atmosphere was incredible, and there was something really exhilarating about the quiet; at moments when it was just Ólafur playing. He used absence to sustain his presence, playing off the distance so many listeners would be from the source of sound. You had to really listen, to really focus, to hear the softness of notes when his music reached its quietest points. This was deliberate, engagement that wasn’t for the faint hearted. The Royal Albert Hall is made for large sounds, and it was daring of him move from a centre stage baby grand, to sit there on an upright piano, and be so small. He said it had been his dream to play there; and to someone like me, I understand the honesty of ending a dynamic performance as simply a man, back to the audience, playing his upright piano.