“Theatre of the Disrupted is a ground-breaking new company that has created a new movement system for actors which revolutionises performer training by transgressing and harnessing the limits of what we are consciously able to apprehend in motion. The process occupies the gap between re-enactment and action possibility, scientific discovery and felt-experience” – Emma Grace

I was the Sound Artist/ Designer for Director Emma Grace and her company ‘Theatre of the Disrupted’ in a workshop which took place in London over three weeks in the Summer of 2017. The workshop involved professional actors and dancers taking part in an exploration of movements and exercises that Emma Grace had arranged, with a 20 minute performance titled ‘What Keeps You Going?’ taking place at the end of the final session.

Emma wanted my presence to be unanticipated by those taking part, so the performers had no knowledge that I would be involved prior to the first session. I set up my monitors and laptop, and Emma asked me to play one of my field recordings I had previously taken on a loop as a way of throwing the performers into a different atmosphere on immediate arrival into the workshop. We selected a street recording of 5th Avenue, New York City, as we felt the noise and bustle would be beautifully contrasting to the stillness of the hall.

I brought along the Bodhran drum I normally use for acoustic testing, to be used as a live rhythm for the warm up session. This involved fairly basic but fluidly changing beats for Emma to instruct her movements over. Sound carried so strongly that it was difficult to gauge the level I was playing at initially so I found I had to quieten my playing when her instructions couldn’t be heard clearly enough.

The next part of the session was spent with me taking notes and listening, and the performers getting used to my presence and responding to the added focus of sound within the workshop.

This session was more hands on on my part, we began the warm up this time with a pre-selected playlist of music that Emma felt would create the right energy in the room. Having gone away and discussed a lot of ideas on how the performers could explore the unity of body, movement and sound, I came up with a small prototype of what I called my ‘soundboard’. This was a board of wood, large enough to be stood on or rested on, with sound absorbing material on one side. It then had a home-made contact microphone attached to the wooden surface, to pick up any small movements made. Emma wanted the performers to have a way of listening to themselves and engaging with their movement sonically, and the soundboard seemed a good experiment for this.

Below: the ideas for my soundboard. 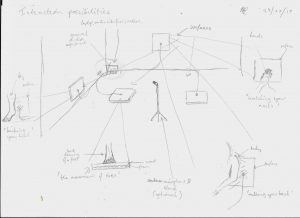 The performers had been working in pairs, creating a sequence of movements that they then passed on to each other. These paired sequences were then later used for the final performance, with one particular one by Ronald and Depi captured with my contact microphones to be part of the sound played.

Later in the session, I set up an area for vocal recordings, this was to be used for a few exercises Emma had planned which involved the pairs of performers asking each other ‘who are you?’, responding with their names, and each asking different questions they had thought of to each other. These recordings came out very well, and edited versions were used for the final work.

This was the final session of the workshop, with the 20 minute performance at the end. Emma decided it would be good to include me in the exercises as I was to be taking part in the final piece. These exercises involved movement (alone or interacting with one another), changes in direction, with a particular one taking the form of a small assault course created to aid co-ordination and synchronisation with the other performers.

The performers didn’t know that Emma had asked me to briefly sing at a particular moment in the final piece, which was part of her reason to include me in the warm up. This was an addition that was meant to catch the performers off guard, and create a live improvised layer to the short piece.

The second part of this final session (approx. 45 minutes) was spent doing rehearsals and organising all the sound tech ready to do a showing of the work. Included was photographer Sarah Ainslie to visually document this part of the workshop.

Final performance – ‘What Keeps You Going?’